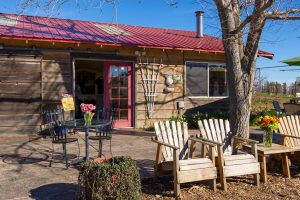 Set among apple orchards and vineyards with views to Volcan Mountain, Julian Orchard Drive begins what can casually be called Julian’s “Winery Row.” It is here you will find Menghini Winery and what will soon be known as Volcan Mountain Winery. The new business will be located on the former grounds of J. Jenkins Winery, originally purchased in 1995 by Jim and Jeanne Jenkins. The couple began their winemaking operations on this 10-acre parcel and then opened a tasting room in 2000.

On May 29, 2015, the Hart family purchased the J. Jenkins Winery. Orchard Realty’s owners, Steve and Deborah Kerch, represented the Jenkins in the sale. Deborah said, “I know it was incredibly important to the Jenkins that the new owners be experienced winemakers–able and willing to carry on the tradition of fine winemaking that the Jenkins began. I am happy to say that goal was realized with this sale, and it was a pleasure to have a small part in it.” 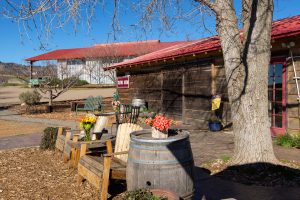 The Harts have a long history of winemaking in Southern California. In 1980, Joe and Nancy Hart founded Hart Family Winery in Temecula, which is the oldest continually owned and operated winery in that area. Over the past 35 years, it has produced award-winning estate grown wines. The Harts run their viniculture operations as a family: Joe and Nancy’s son, Jim, is the lead winemaker at Hart Winery, and his wife, Christine, is the business manager. Jim, also the former winemaker at Milagro Farm Vineyards & Winery in Ramona, will be the lead winemaker at Volcan Mountain. Jim and his brother Mike will take the management reins at Volcan.

Melanie Shaffer, who ran the J. Jenkins tasting room for 6 years, will also continue working at Volcan Mountain Winery. Jim Hart, referring to Melanie as a “keeper,” is very pleased to have her on board helping with the internal operations as the sales & marketing manager and event coordinator. As for the outside grounds, he said the vineyard looks “spectacular.” 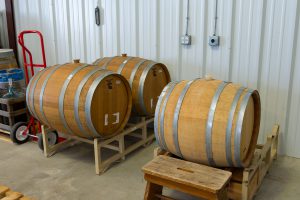 The winery is currently operating under the J. Jenkins name, but will transition to the new name of Volcan Mountain Winery with a soft opening on June 27. That day, five new wines will be available to taste. There will also be a guitar player, olive oil tasting and food for purchase. The public is encouraged to attend; events will run from 11 a.m. to 5 p.m. Then the grand opening (also open to the public) will take place on Saturday, July 11, with more music, food and festivities. Both days will feature discounted prices on wine tastings and purchases.

As the family expands their wine growing into the mountainous area of Julian, they plan to try cultivating grapes, such as Malbec and Cinsault, that are suited to higher elevations. Volcan Mountain Winery will continue to make wines from the Pinot Noir and Pinot Gris grapes originally planted and grown by J. Jenkins. Likewise, they will continue the Jenkins’ tradition of creating an apple wine from the apples harvested on the property. Jim Hart said that in the future he might also use the apples to venture into cider making. 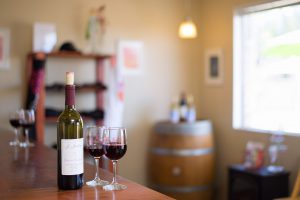 Soon, all of the wines created at Volcan Mountain Winery will be grown, finished and bottled on the Julian property. This fall the first grapes will be crushed. To launch, the Hart family has supplemented the remaining grapes from J. Jenkins with those grown at Hart Family Winery in Temecula. The first batch of wines available June 27 were finished and bottled at Volcan. Now and in the future, none of the wines at Volcan will be the same as those sold at Hart. The two wineries will produce completely different wines and operate as separate entities.

Jim Hart is looking forward to “sourcing nice San Diego local fruit and making new wines from it” and being a “contributing part of the wonderful community of Julian.” He and his family are excited about expanding into San Diego County with a new physical place to call their wines–home.

The winery at 1255 Julian Orchards Drive is open from 11 a.m. to 5 p.m. Fridays, Saturdays and Sundays, with plans to expand the hours and days of operation in the near future. (760-765-3267; website coming soon: volcanmountainwinery.com.)

Deborah and Steve Kerch are both looking forward to the addition of Volcan Mountain Winery to Julian. A warm welcome to the Hart Family! Deborah Kerch opened Orchard Realty with her husband, broker/owner Steve Kerch, in October 2012. Together they offer a complement of real estate services, including commercial, industrial, investment and residential. (www.Orchard-Realty.com)